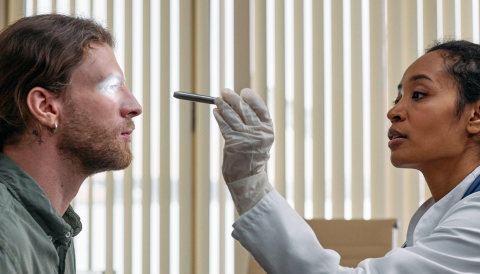 With technology advancing at a rapid pace, there are products readily available that will change the healthcare sector forever…from wearable technologies to mobile phone applications which track your health, we are in an ever-evolving era of invention and innovation. In this post, we will be looking at some of the latest and greatest technology that will be making its mark and contributing to our health and wellbeing for years to come!

Virtual Reality (VR) is a simulated reality that you achieve through using some form of technology, starting out with a basic headset and controllers and scaling all the way up to a treadmill that allows you to run and jump as part of a game.

There are many uses for VR in healthcare, the first of which is medical training where students can gain vital experience without real life repercussions. It also allows students to watch from a lead surgeons point of view as they perform procedures and treatments all with the bonus of being able to pause and take notes.

VR can also be used as a form of anaesthetic (although it is usually partnered with a local anaesthetic). An application called SnowWorld has been used on burn victims – they play a game where they throw snowballs with the tilt of their head all whilst they are under treatment. Playing the game distracts the mind away from the pain. Doctors at the Shriners Hospital used a VR Headset that read brainwaves and it was recorded that brain activity relating to pain dropped by between 35% and 50% whilst in the game.

5G is the next generation of mobile internet connectivity and an upgrade on 4G. It also makes better use of the radio spectrum allowing for more people to access faster data, upload speeds and maintain a more stable connection. It can reach speeds of up to 300 megabits per second which is faster than most WiFi connections.

With 5G being introduced we will see huge benefits as medical professionals can transfer large files such as X-rays and MRIs much quicker. This can lead to faster critical decisions being made on a patient’s life. There is also mobile robotic surgery which is now capable over a 5G network. This is when a surgeon can use a control pad to direct a robot to perform surgery from a remote location. This could save lives as specialists and surgeons won’t have to travel or have their patients travel to them.

The World of Artificial Intelligence

Artificial intelligence (AI) is a term often used to describe machines or programmes that mimic cognitive functions that could be associated with the human mind. Typically, in the medical sector you would see more ‘dumb’ AI which means they have been taught how to do a specific task better than a human but can’t do anything else or think for themselves.

AI has many potential benefits in healthcare, one of the first benefits that it can have is in the radiology department. It can lead to less human error and can drive efficiency rates up. Another big potential benefit is AI led surgery, AI controlling a robot arm could complete surgeries with less scarring, less risk to the patient and could also potentially do it faster.

While some of these technologies are fairly far away, some are also close to being introduced. Here at NPH, we are excited to see what new treatments and methods the future will bring. We have open minds and are eager to adopt newer, safer and more efficient techniques and technologies that will have a positive impact in the lives of our clients.

However, in the present why not have a look at our website to see what premier services and treatments that we already offer? https://www.newcastlepremierhealth.com/services/